At 978 meters (3,210 ft), Scafell Pike is the highest mountain in England. It is characterised by crags and general ruggedness. Wainwright describes it as being "...every inch a mountain". He goes on to write " ... Roughness and ruggedness are the necessary attributes ... [to make a mountain] ... and the Pike has these in greater measure than any other high ground in the country – which is just as it should be, for there is no higher ground than this." (Wainwright 1960, The Southern Fells, Scafell Pike, 5) 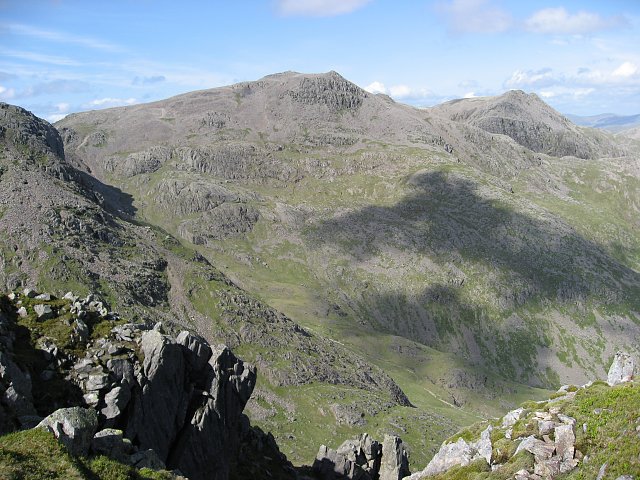 Scafell Pike (top centre) seen from the Long Green ridge leading to Scafell summit. This view of Scafell Pike shows its southern flank high above the path climbing from Cam Spout to Mickledore. The southern peak of Scafell Pike is more prominent from this direction. The main summit of Scafell Pike is slightly behind to the left. Ill Crag and Esk Hause can be seen on the top right of the image. Photograph by Ann Bowker.

Scafell Pike can be reached by fell walkers by a number of different routes. The routes start from different valleys around the foot of the Pike. These are the: 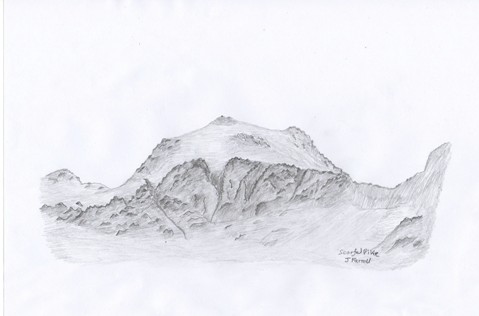 Sketch of Scafell Pike - viewed from the Wasdale side.

One characteristic noted by Wainwright and by any fell walker who has undertaken the walk from Borrowdale, Great Langdale and Eskdale, is the distance needed to be travelled to actually reach the summit. A friend of mine joked about needing to set up a base camp in order to reach Scafell Pike summit. The routes from Borrowdale and Eskdale, involve a great deal of walking before you actually see anything of Scafell Pike itself.

Alfred Wainwright advises walkers not to underestimate the amount of work required to reach Scafell Pike. He writes "The ascent of Scafell Pike is the toughest proposition the ‘collector of summits’ is called upon to attempt .... From all bases except Wasdale Head the climb is long and arduous and progress is slow: this is a full-day expedition, and the appropriate preparations should be made" (Wainwright 1960, Scafell Pike 12).

Part of the reason for this is that Scafell Pike is just one summit in a spectacular range of fells. So much walking over foothills is required before the main range is reached, and the final ascents are made. The exception to this is, as Wainwright points out above, the Wasdale Head via Lingmell Gill route, which is the most direct and hence the shortest distance.

Two Scafell Pike Routes - These two YouTube videos from Wasdale Mountain Rescue and Walking Englishman show a couple of different routes to Scafell Pike. The one made by Wasdale Mountain Rescue shows the above mentioned route from Wasdale Head via Lingmell Gill. The one made by Walking Englishman shows the route from Seathwaite in Borrowdale. The latter walk also includes the Scafell summit as well as Scafell pike.

The Scafell Pike massif includes the summits of Great End, Broad Crag, Ill Crag, Scafell Pike, Lingmell and Scafell. It is interesting to note that Scafell and Scafell Pike are actually two separate neighbouring fells. Wainwright also classifies Great End as being a separate fell in its own right, whilst Ill Crag and Broad Crag are regarded as being two of the three Scafell Pikes. Writing about Ill Crag, Broad Crag and Scafell Pike, along with the rest of the Scafell range, Wainwright notes that “The three summits rise from the main spine of an elevated ridge which keeps above 2800 feet to its abrupt termination in the cliffs of Great End, facing north to Borrowdale; lower spurs then run down to that valley. In the opposite direction, southwest, across the deep gulf of Mickledore, is the tremendous rock-wall of the neighbouring and separate mountain of Scafell” (Wainwright 1960, Scafell Pike 5).

At 964 meters, Scafell is not quite as high as Scafell Pike. But despite this fact, Wainwright notes that Scafell is traditionally regarded as the "superior" mountain in the range. The reason for this is to do with spectacular rock faces above Mickledore. He writes "This respect is inspired not by the western flank going down to Wasdale nor by the broad southern slopes ending in the Eskdale foothills but rather by the towering rampart of shadowed crags, facing north and east below the summit, a spectacle of massive strength and savage wildness but without beauty, an awesome and a humbling scene" (Wainwright 1960, Scafell 2).

One of the best vantage points for seeing the whole the Scafell range is the summit of Bowfell above Great Langdale. From here it is possible to see the whole ridge from Great End, past Ill Crag, Broad Crag, Scafell Pike itself and Scafell. From here the Cliffs of Broad Stand which separate Scafell from Scafell Pike above Mickledore are very pronounced.

This view of the Scafell range is looking west across Upper Eskdale to Scafell Pike in the centre. Scafell itself is on the left, with the cliffs of Broad Stand towering above the col of Mickledore. Broad Stand is impassable to walkers. As Wainwright wrote in his book on the Southern Fells, "The greatest single obstacle confronting ridge-walkers on the hills of Lakeland is the notorious Broad Stand, with which every traveller from Scafell Pike to Scafell comes face to face at the far end of the Mickledore traverse. Obstacles met on other ridges can be overcome or easily by-passed; not so Broad Stand" (Wainwright 1960, Scafell 3). As such, routes between Scafell Pike and Scafell involve a steep descent from Mickledore to Lords Rake (west) or the gulley leading to Foxes Tarn (east) before the ascent to Scafell summit can be made. Photograph by Ann Bowker. 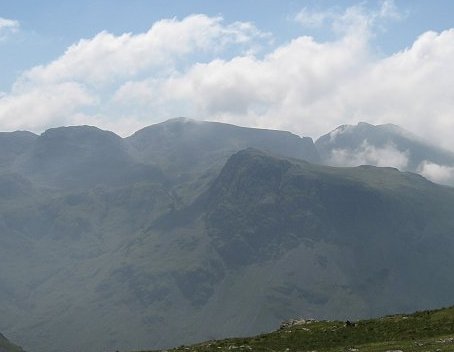 The Scafell range seen from the summit of Great Gable. Lingmell Crag is located in the foreground with Scafell Pike behind and slightly to the left. Broad Crag can be seen to the left of the main Pike, and Scafell itself can be seen surrounded by cloud on the right. Pikes Crag and Pulpit Rock are also visible on the right flank of Scafell Pike. Photograph by Ann Bowker. 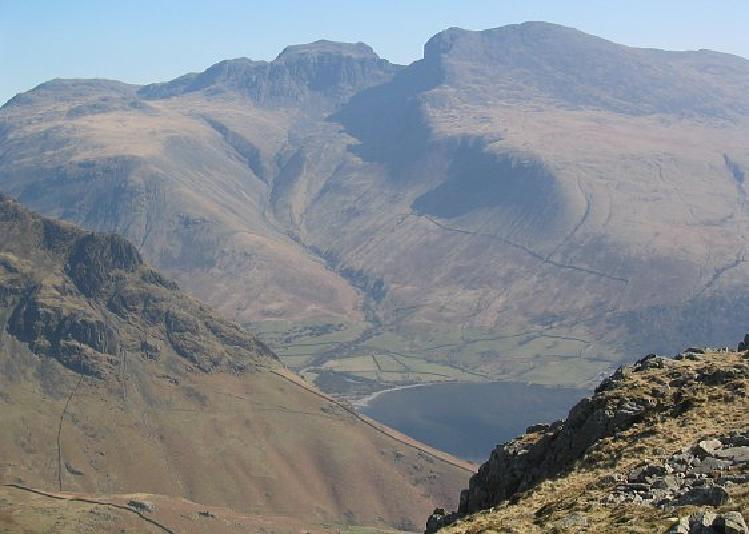 View across Wasdale Valley to Lingmell (left), Scafell Pike (centre), and Scafell itself (right). Two routes ascend from Wasdale, travelling up Lingmell Gill before branching off to Mickledore or Lingmell Col. Both routes then meet up again just before Scafell Pike summit. Photograph of Scafell range by Ann Bowker

“This is it ... the ultimate; the supreme; the one objective above all others; the highest ground in England; the top of Scafell Pike“
(Wainwright 1960, Scafell Pike, 23). 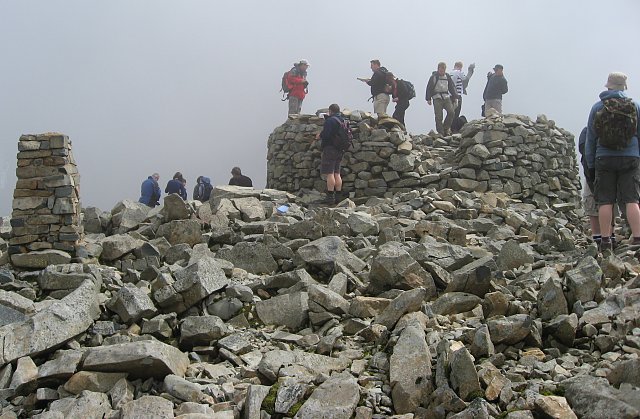 This is Scafell Pike summit with its cairn and trig point. The cairn is slightly unusual in that people can climb up some rocky steps to stand on a round platform. Once here, you are in no doubt that you have arrived at the highest point on Scafell Pike. Note also the rocky terrain all around. This ruggedness is one of Scafell Pike's characteristics mentioned in the quote by Wainwright at the top of the page. Photograph by Ann Bowker.

Once you've downloaded the 3d Map of Scafell Pike, I recommend you check out the cliffs and crags around Mickledore which lend themselves to exploration in particular. The 3d images of Broad Stand, are really impressive. Use the Navigation Controls to see this towering rock face from different perspectives. 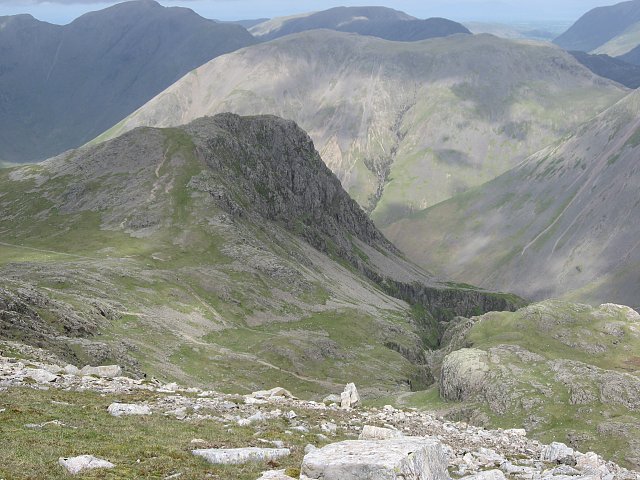 
Wainwright on the Scafell range

In Alfred Wainwright's Pictorial Guide to the Southern Fells, he gives this inspiring description of the Scafell - Bowfell range in graphic terms. He States "Within this area the fells are the highest, the roughest, and the grandest in Lakeland: they are of volcanic origin and the naked rock is much in evidence in the form of towering crags and wildernesses of boulders and scree ... there is an exhilarating feeling of freedom and sense of achievement on the airy ridges poised high above deep valleys. This is magnificent territory for the fell walker. There is nothing better than this." (Wainwright 1960, Introduction to The Southern Fells).

Wainwrights Pictorial Guide to the Southern Fells has route descriptions for Scafell Pike, Scafell, and all the other fells in the Scafell range. The quotes used on this page were taken from this book.

The first time I saw the Scafell Pike Range

The first time I saw the Scafell Pike range I was completely awestruck. I was heading up towards Styhead from Seathwaite in Borrowdale. In the far distance Lingmell Crag on Scafell Pikes north-west flank came into view. As I continued along it appeared massive, dark and formidable, yet completely intriguing. I was doing a route to the neighbouring fell of Great Gable that day, and as I made the steep ascent from Styhead to its summit, more and more of the Scafell range came into view as I looked back. It was a spectacular sight on a cold and crystal clear April day.

Later on that year I saw the eastern side of Scafell Pike range from the summit rocks of Bowfell. This view was no less impressive. It was a warm summer day, still clear, but this time with grey clouds brushing over the Scafell Pike summits, occasionally obscuring the highest tops. I was particularly struck by the shape of the towering rocks of Broadstand, and how the fells of Scafell and Scafell Pike rose up from the connecting ridge of Mickledore. I didn't know any of these names at that point - except Scafell Pike itself, but these spectacular views inspired me to research the area on the OS Explorer Map, and a month later I visited Scafell Pike summit myself.

Read about this walk to Scafell Pike in my Lake District Walks blog.

If you are planning a walk on Scafell Pike or any other fell in the Scafell range, the ordnance survey map for this area is The English Lakes: South-western Area (OS Explorer Map Series)