There are two Scafell Pike route options that will be covered on this page. Both begin from Seathwaite in Borrowdale. The first route heads south through Grains Gill and Esk Hause, whilst the other heads west towards Sty Head.

Like most routes to Scafell Pike, this route is long by most peoples standards. If you return by the same route it is at least a 10 mile round trip.

This route heads south from Seathwaite to the head of the Grains Gill valley where it meets the Langdale to Sty Head path underneath the cliffs of Great End. The path then heads south east before branching right to go up to Esk Hause. From here the path climbs onto the main ridge of the Scafell massif just south of the summit of Great End. Continuing south, the path skirts the boulder strewn Ill Crag and Broad Crag before finally climbing to the summit cairn of Scafell Pike. 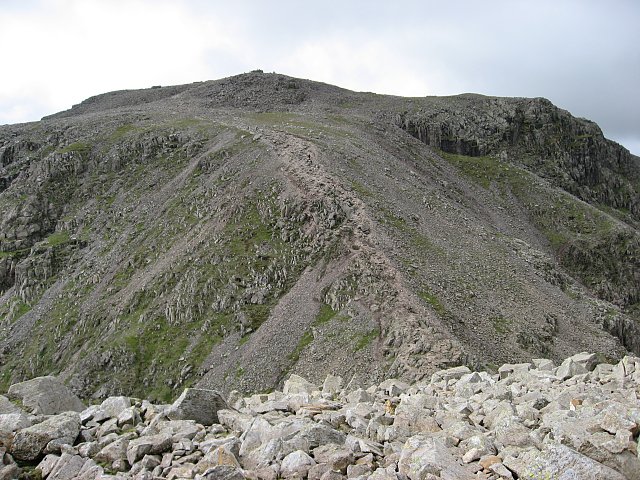 This shows the final stage of the Grains Gill - Esk Hause route. After decending Broad Crag into Broad Crag Col we can see the final ascent up the steep rocky path to the summit cairn on Scafell Pike. Photograph by Ann Bowker


Scafell Pike via Sty Head and the Corridor Route

This route is a 12 mile round trip.

Starting from Seathwaite the path crosses Grains Gill at Stockley bridge before taking the west branch of the path that heads towards Styhead Tarn. At Styhead itself, the route briefly follows the north east path towards Esk Hause and Langdale, but turns off to the south to join the Corridor Route. This traverses the north western side of the main massif, before turning left to make the final ascent to Scafell Pike (just passed the Lingmel Col).

Above: This is a Virtual Tour I created of Borrowdale to Scafell Pike via Sty Head and the Corridor Route. 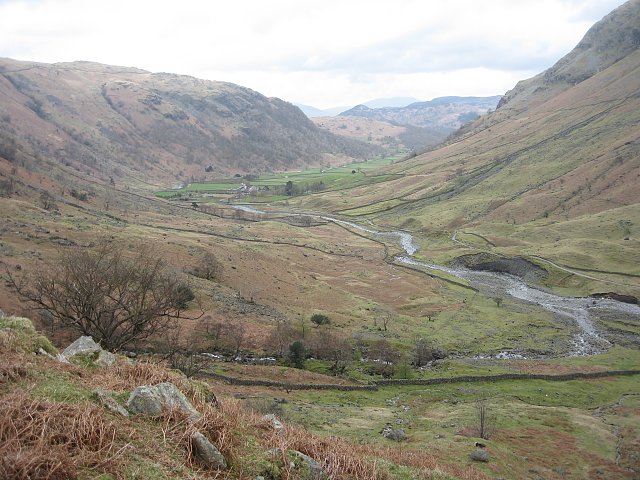 Looking back down to Seathwaite at the head of the Borrowdale valley. Two well know routes to Scafell Pike begin here. Photograph by Ann Bowker 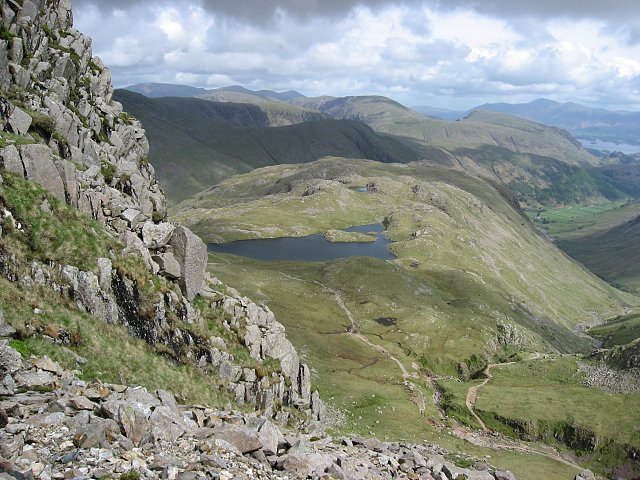 View from Great End looking down onto Sprinkling Tarn. The path from Borrowdale can be seen going down Ruddy Gill on the right. Writing about the ascent of Grains Gill and Ruddy Gill, Wainwright notes how the cliffs of Great End increasingly dominate the view, coming to assume awe-inspiring proportions. Photograph by Ann Bowker

Julia Bradbury featured the Borrowdale to Scafell Pike via Grains Gill Route in the last episode of Wainwright Walks (series 1). 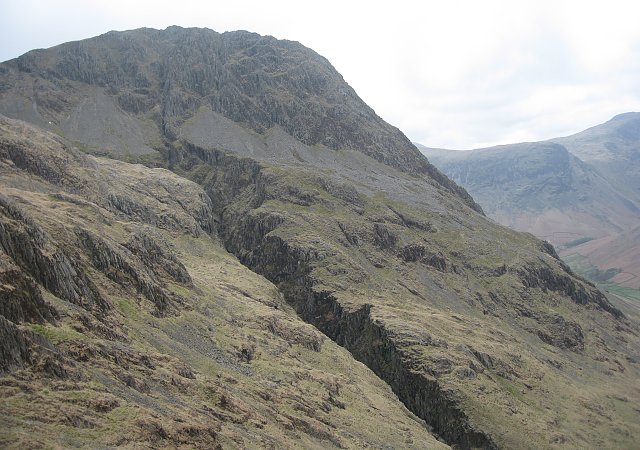 View of Piers Gill and Lingmell from the Corridor Route. Photograph by Ann Bowker

Wainwright notes "The Corridor Route ... links grassy shelves on the very rough western slope of Great End and Broad Crag and is, in fact, the only easy passage possible along this flank, which is deeply cut by ravines. It provides an excellent way to the Lingmell Col (for Scafell Pike or Scafell) from Sty Head, interesting thoughout and is the easiest of all routes to the Pike." Wainwright (1960) The Southern Fells